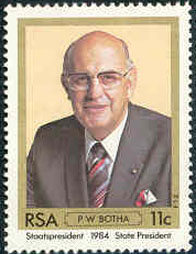 First elected to Parliament in 1948, Botha was an outspoken opponent of communism and a supporter of the apartheid system. Botha resigned as leader of the ruling National Party (NP) in February 1989 after suffering a stroke and six months later was also coerced to leave the presidency. In F. W. de Klerk's 1992 apartheid referendum, Botha campaigned for a "No" vote and denounced De Klerk's administration.

In early 1998, when Botha refused to testify at the Nelson Mandela government's Truth and Reconciliation Commission (TRC), he was supported by the right-wing Conservative Party, which had earlier contested his rule as the official opposition. For his refusal, he was fined and given a suspended jail sentence for crimes against humanity. The sentence was overturned on appeal.

Part of this article consists of modified text from Wikipedia, and the article is therefore licensed under GFDL.
Retrieved from "http://en.metapedia.org/m/index.php?title=P._W._Botha&oldid=435360"
Categories: