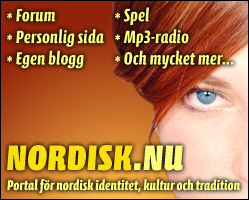 Nordisk.nu was an, now defunct, Swedish internet portal for the Nordic identity, culture and tradition. The portal was officially launched at 23:00 on April 18 2007. Only four days after its official launch, the portal had over a thousand registered members. The portal of Nordisk.nu include blogs, galleries, contests, games and music, as well as several other features for a digital, social networking. There is also a large forum that currently contains more than 400 000 messages and 35 000 topic threads. The portal was available in four languages; Danish, English, Norwegian and Swedish.

Are you among those who are fed up with the mainstream Internet communities, with their superficial politically correct and infantile mentality? And are you tired of how when someone finally protests against all this they are branded "racist", "fascist", "nazi" and then get banned from the community by its political commissaries?

Nordisk.nu is a community for Swedish and other Nordic youth who have thrown away their politically correct shackles and who are looking for an alternative. In here, no defaming of Nordic peoples and cultures is allowed; instead we do everything within our power to combat such defamation. We feel no shame for being Northerners – on the contrary! We hail our proud heritage and envision a bright Nordic future for ourselves.

The theme of this website is our Nordic heritage and future. Here you will find news and articles with a truly Nordic perspective. You can take part in polls and join discussions in our forum on subjects like music, politics, history and news. And why not make contact with nationalists across the whole of Sweden and Scandinavia or challenge them in a game. Make sure you don’t miss the multifaceted and captivating on-line game Imperium which will be launched this summer.

Listen to our MP3 radio containing over 800 songs in many different genres, everything from Heavy Metal and resistance rock to ballads. You will also get your own personal page with your own blog and guest book.

But that is not all. Nordisk.nu is constantly evolving, and we are continually adding new exiting features to our portal. Our aim is to create the world’s best meeting place on the web for nationalists.

Registering for a membership is for free and won’t take more than a minute. So, what are you waiting for? Join our community! The future is ours!