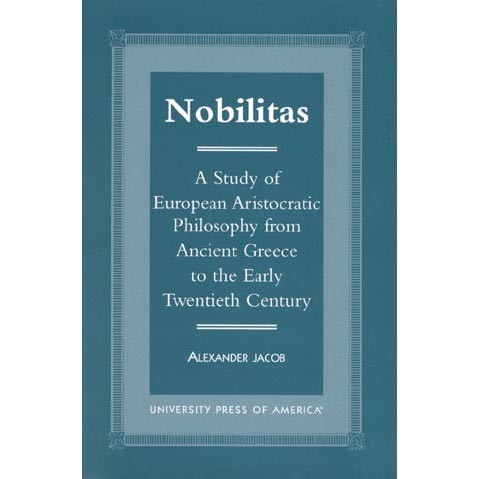 Nobilitas: A Study of European Aristocratic Philosophy from Ancient Greece to the Early Twentieth Century is a book by Dr. Alexander Jacob is a study of the history of aristocratic philosophy from ancient Greece to the early twentieth century that aims at providing an alternative to the liberal democratic norms, which are propagated today as the only viable socio-political system for the world community. Jacob reveals that, contrary to popular belief, the social and cultural development of European civilization has, for twenty-five centuries, been based not on democratic or communist notions but, rather on aristocratic and nationalist notions. Beginning with the political philosophies of Plato and Aristotle, and continuing through Renaissance and Baroque aristocratic philosophers, the German Idealists, and English and Italian nationalists, the study ends with the transformation of aristocratic philosophy in nineteenth century Germany into racist elitism. As such, the study includes a survey of the philosophical bases of racism and anti-Semitism. These topics have been systematically excluded from academic and political debate since the end of the last Great War. This study is a pioneering work in understanding and changing political ideologies. [1]