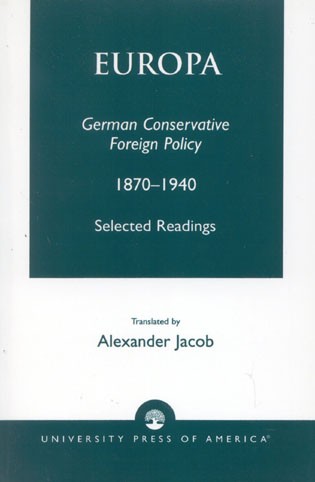 Europa: German Conservative Foreign Policy 1870-1940 is a book by Dr. Alexander Jacob which presents, to the modern reader, the foreign political thought of four major German conservatives from the crucial period between the Second Reich and the Second World War. The texts chosen reveal the spiritual and cultural motives, of German conservatives at the turn of the century, that inspired expansionist policies and the consistent opposition to the Jewish financial rule. The lack of German translations of these important texts so far has clearly been a disadvantage to the modern historian in his assessment of the philosophical significance of the Conservative, as well as of the National Socialist, foreign political ideology. [1]