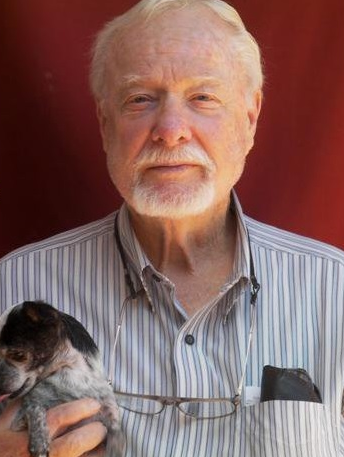 Bradley Reed Smith (February 18, 1930 - February 18, 2016) was an American historian, researcher and free speech activist, who is best known for founding the Committee for Open Debate on the Holocaust (CODOH), which he directed, specialising in the field of revising the official Allied claims of World War II historiography.

Smith was born to a working-class family in South Central Los Angeles where the family remained until 1970.

In 1979, his life changed forever when he read a leaflet by Robert Faurisson, The Problem of the Gas Chambers. The story of this life-changing moment is recounted in his auto-biographical work, Confessions of a Holocaust Revisionist. Smith writes, "I felt stunned, as if Buck Rogers had somehow come down from the 21st century and zapped me with a beam from his ray gun." It took him three months to digest the core of the revisionist argument. He knew from the beginning that he was going to address the taboo against publishing revisionist arguments, not the arguments themselves.

Through his efforts in the years that followed, millions of Americans learned for the first time about Holocaust revisionism and the scholarly debate on this chapter of history. In the mid-1980s, he published Prima Facie, a newsletter aimed at journalists and editors, quoting their own writings, that focused on cultism, suppression of free inquiry and censorship on the Holocaust issue.

Smith had a long association with the Institute for Historical Review -- as a contributor to their publications, as a speaker at conferences, and, during the late 1980s, as its Media Project director, a role that generated hundreds of radio and television interviews.

Starting in the late 1980s and on through to the present, he has been active as director of the Committee for Open Debate on the Holocaust, a group dedicated to defending free speech and free inquiry on the Holocaust issue, to encouraging greater public access to revisionist scholarship, and to promoting awareness of the controversy regarding the Holocaust story.

Since 1990, Smith published a newsletter, the Smith's Report, which reports on his own activities, those of CODOH, and various articles and news stories about revisionists and revisionism around the world.

Smith is best known for having published several essay-length advertisements calling for open debate on the Holocaust in student newspapers published at colleges and universities across the United States. In the 1991-92 school year, CODOH advertisements or statements appeared in 17 student newspapers, several at major universities. During the 1993-1994 academic year, his ad -- headlined "A Revisionist Challenge to the US Holocaust Memorial Museum" -- appeared in at least 35 college and university campus papers, as well as one major metropolitan daily. In 1999 and 2000, Smith created a new publication, The Revisionist, a 24 page pulp-stock publication which was distributed free on campus. His January 2000 issue which featured a story on intellectual freedom and book-burning was itself burned on the campus of St. Cloud University. By the end of the 2000-01 academic year, his ads had appeared in more than 350 student papers.

Smith's campaign generated news reports and commentary in such prominent periodicals as The New York Times and Time magazine, and editorials in The Washington Post, The New York Times, the Philadelphia Inquirer, and the Los Angeles Times.

Deborah Lipstadt, a Jewish academic and a prominent figure in the Holocaust lobby, took aim at Bradley's efforts in her Denying the Holocaust. One chapter of her book, "The Battle for the Campus," focuses specifically on Smith's advertisements. She laments that after seeing the ads many students may "assume there is an "other side" [to the Holocaust story.] Smith has spoken on the subject of intellectual freedom with regard to the Holocaust on more than 400 radio talk shows and news broadcasts, as well as on nationwide television, including an appearance with Michael Shermer (Skeptic Magazine) and David Cole as a guest on the Phil Donahue Show.

Bradley Smith and CODOH were one of the first Holocaust revisionist groups to develop a Website in the early '90's. Since that time he has hosted several sites, blogs, a MySpace page, and participated in many discussion groups and forums on-line. He is the author of many articles, and several books.

Smith’s, Break His Bones: The Private Life of a Holocaust Revisionist, is a 315-page memoir published in 2002 that looks back on the challenges, disappointments and joys of his years-long battle against taboo and censorship. Break His Bones details the organized campaign to suppress free speech and intellectual openness on the "Holocaust" issue, showing how skeptics are blacklisted, and their works banned. Smith gives a human face to the much-maligned "Holocaust deniers."

In December 2006, Smith delivered a talk to an international delegation at the Tehran Holocaust Conference, The Irrational Vocabulary of the American Professorial Class with Regard to the Holocaust Question.