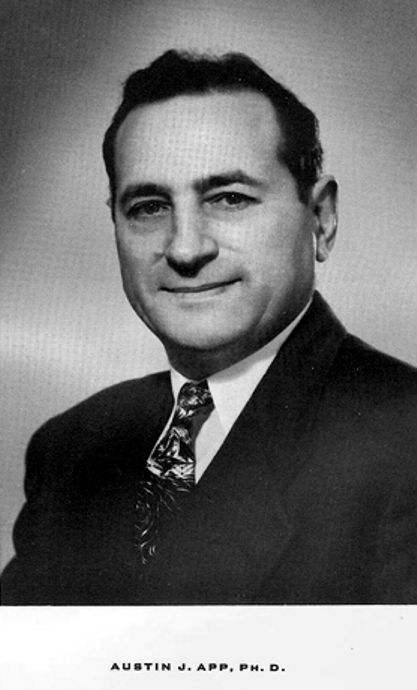 Austin Joseph App (24 May 1902 - 4 May 1984) was a Professor of medieval English literature and author. Of Austrian Sudetenland descent, App was an outspoken defender of Germany and spoke before audiences that the alleged holocaust was a hoax. 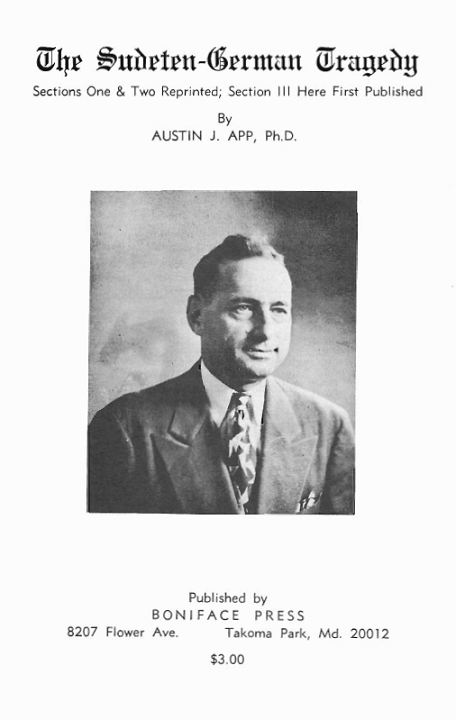 For a decade he was chairman of the Pastorius Unit of the Steuben Society, Philadelphia; for six years (1960-66) he was National President of the Federation of American Citizens of German Descent (and thereafter Honorary President) and for several years he was on the speaker's bureau of the John Birch Society. For several years from 1965 he was Chairman of the Greater Philadelphia Captive Nations Committee. In 1968 he retired from La Salle College, after 20 years service. In February 1975 he was awarded the European Freedom Prize of DM 10,000 in Munich, Germany, by the Deutsche Volksunion and the Deutsche National Zeitung.[1]

From 1948 he was director of the Boniface Press, in Takoma Park, Maryland.

App wrote letters to magazines, newspapers and politicians complaining about Franklin D. Roosevelt entering World War II. App blamed Communists and Jews for post-war problems rather than Germany which was, he said, manoeuvred by Jewry into the war. He blamed Germany's post-war problems on plans which were not put into effect. Some of these letters were published. He also wrote articles for Gerald L.K. Smith’s publication The Cross and The Flag.

App’s work inspired the Institute for Historical Review, the California center of Holocaust investigation founded in 1978. The Institute’s chief spokesman in the UK is David Irving, the famous historian. He campaigned for Germans and Austrians to be given the chance to emigrate to the United States after World War II.